When I read about recent layoffs and lack of funding for startups I feel that we are slowly getting into slow down or into recession , let me tell you why , according to https://layoffs.fyi/ the data speaks pre covid vs up to date data.

Every stock and fund is going down, thousands of people have lost their  fortunes into various things which they don’t have control over it , everything that used to be a profitable method to invest is now collapsing.

After looking around for the indicators found a great article to sense whether we are in recession or not https://marker.medium.com/what-champagne-rvs-and-underwear-can-predict-about-the-next-recession-6889e939a50d

If you have been victim of a recent Layoff, I offer you my most sincere condolences.

PS: Don’t let yourself be eaten by anxiety.

Are currently employed, think twice before moving out and where to go.
Have just been fired, look for opportunities in non traditional way as well.
Are thinking about joining any tech career, wait for the dust to settle.
Are thinking about doing startup, Best wishes from me 🙂

Last few months its been very hard for me on personal and professional level which is why there was no blog post from me.

Catching up on recent events on healthcare and covid , looks like still covid at large and Tamilnadu CM also got covid positive as I write.

Really sadden to see how this covid pandemic affecting peoples lives and surrounded  lives , in my close family relations my uncle and my aunty, both of them aged 60+ died few weeks ago due to covid , both of the were retired teachers and both of them got admitted to same hospital ,most hurting part was that my aunty died and got cremated, due to my uncle condition we are not able to inform that his wife no more , three days later my uncle also died without even knowing his wife also died , on those 3 days he keep asking about my aunt condition and did she also getting the same treatment etc , its so much pain …. no words to write.

This pandemic affects on all levels i.e. family , kids, financial you name it , people lost their jobs , not able to feed their family , no vaccine available etc , this pandemic puts growing countries economy and their peoples lives back to 3 decades back which is really hurting and makes me unhappy.

Stay safe and be well , god bless us

Due to various reason I was not able to write posts regularly, especially on this pandemic people lost jobs, lost dear ones and their day to day activities got severely affected on all front i.e. financially , emotionally etc.

As we all know that diabetes is chronic illness and very vulnerable to infections due to compromised immune system, what we can do about it and how do make sure that we can keep ourself safe and make people around us safe ?

Please look at the treatment protocol issued by AIIMS https://covid.aiims.edu/protocols-for-management-of-people-with-diabetes-in-covid-facilities/

Stay safe and be safe 🙂

Few weeks back I got a chance to download and start reading dietary guidelines for Indian’s  provided by NIN , click here to download (P.S : its about 126 pages document) some of the recommendations were blindly followed from AHA from USA.  Given below were my review and they should have better done the research and written the final draft.

for example on page 14 for fats

Adults need to be cautioned to restrict
intake of saturated fat (butter, ghee and hydrogenated fats) and cholesterol (red meat, eggs,
organ meat). Excess of these substances could lead to obesity, diabetes, cardiovascular
disease and cancer.

cholesterol intake should be maintained below 200 mg/day. One
can reduce both saturated fat and cholesterol intake by limiting the consumption of
high-fat animal foods like butter, ghee, meat, egg and organ meats and consuming
low fat (skimmed) milk instead of whole milk. However, consumption of eggs (3
eggs/ week) is recommended in view of several nutritional advantages

There is a strong association between salt intake and blood pressure.
Prevalence of hypertension is low in populations consuming less than 3 g salt per
day. The usual increase in blood pressure with age is also not seen with such
intakes. The amount of salt consumed is reflected in urinary sodium. Drastic
restriction of dietary salt decreases the risk of hypertension. However, this effect is
not uniform as only 20-30% of population are salt sensitive

Most of the above points from the draft has not been proven and in some places they were contradict their statement itself for example above they were asking people to reduce intake of salt but not sure that taking more salt directly co-relates to  get blood pressure. In my honest opinion they should have done better job by spending more time on research and validate their assumptions and write the guidelines and publish to public

I have recently bought the ebook released by Dr.Pramod tripathi on manual & recipe handbook of freedom from diabetes , given below were some of the notes from the book.

§ Major cause of diabetes is not sugar but FAT

· Making the fat move from storage

· Our blood and most body bards are alkaline and continuously being in a sea of acid doesn’t help the system to recover so shit to diet which will be more on alkaline i.e. low on fat , acid and high on micronutrients

· Our body is largely alkaline so when you through the diet [tea is acidic, milk is acidic, all animal products are acidic] supply a regular dose of acid there is subtle inflammation continuously present and this advances the diabetic disease

§ If you are serious on reversal quit milk immediately and completely

· People wake to a hot cup of tea or coffee , it is acidic , kills natural enzymes doesn’t supply the minerals and vitamins the body would love to have first thing in the morning and shoots up your stress hormones which work against insulin we start diabetics on a special juice / smoothie first thing in the morning and they start reversing .. its alkaline gives wonderful vitamins, minerals, enzymes.

1. Excess carbohydrate will be converted into Fat and stored inside our cells so eating FAT doesn’t get stored as FAT. So fundamentally wrong hypothesis which will lead into one wrong assumptions to another etc

3. To simply promote vegan don’t throw unproven and wrong things on FAT, Milk etc but in recipes you were telling people to use VCO or VOO even coconut gratings so its contradicting what has been written and what has been actually asking people to take so lot of flaws , unproven assumptions not sure how do we take this book ?

As I started writing blog post about the research on fat & salt , the food industry and regulatory houses keep advising people with out evidence that if you have more salt or more fat in your diet you will get hypertension (aka blood pressure) and Heart disease but they don’t have clinical evidence to prove the same but there were no of clinical studies which contradict the same.

Recently  A new study published in the American Journal of Hypertension analyzed data from 8,670 French adults and found that salt consumption wasn’t associated with systolic blood pressure in either men or women after controlling for factors like age.

the authors write, is that the link we all assume between salt and blood pressure is “overstated” and “more complex than once believed.” It should be noted, however, that even though the study found no statistically significant association between blood pressure and sodium in the diet, those patients who were hypertensive consumed significantly more salt than those without hypertension—suggesting, as other research has, that salt affects people differently.

As for the factors that did seem to influence blood pressure, alcohol consumption, age, and most of all BMI were strongly linked to a rise. Eating more fruits and vegetables was significantly linked to a drop.

yet another big study indicates that the fear of salt is highly exaggerated, When they examined the salt habits of over 100,000 people, it turned out that people who salted more than the recommended amount had the lowest risk of cardiovascular disease. Those who salted a lot less – according to official guidelines – had a higher (!) risk of disease. 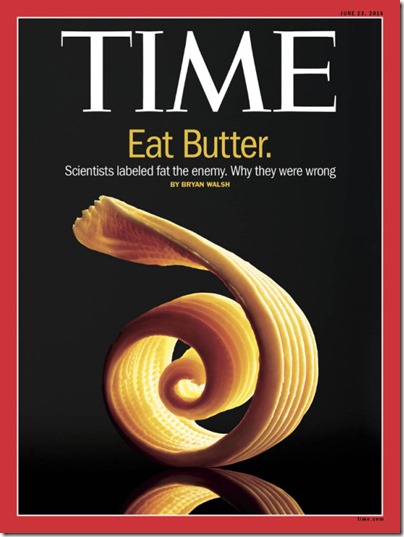 I have written more about fat is good for our health in my previous posts so here I am going to leave two links from time’s magazine.

The paradigm shift continues and the outdated fear of fat is on its way out faster and faster.

Its perfectly Ok to have fatty and salt foods in raw nature not from processed food though.

Have you seen the movie? What did you think?

The blame is clearly put on the real culprit: sugar and addictive junk food. Here’s the movie’s strengths… and its fatal weakness: Among the experts who get the most exposure in the movie are noted, Robert Lustig, science journalist Gary Taubes and author Michael Pollan – and former president Bill Clinton.obesity is not about calories, it’s about sugar and addictive junk food.

The movie mainly focus on vegetables but forgot to add proteins and other good stuff while eating fat and meat , looks like they don’t want to get into controversial items of fat 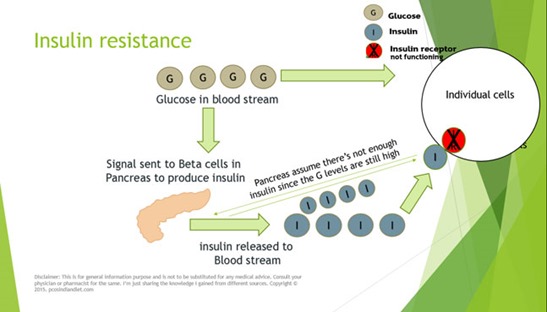 What is driving up insulin?

insulin levels are way up the body gains weigh, reducing calorie intake doesn’t matter since the body only further reduce caloric expenditure to match and make the body gain weight. The carbohydrate-insulin hypothesis assumes that carbohydrate intake drives insulin but insulin itself will drive insulin resistance which will increase insulin in a self reinforcing cycle which will be like fat get fatter 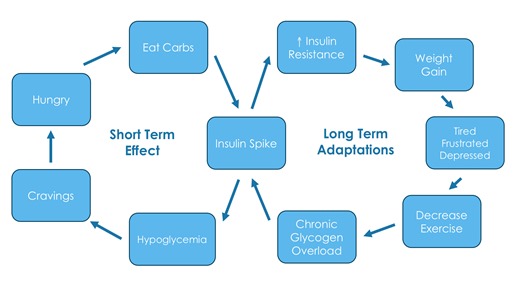 central part of treating diabetes should be more on how do we reverse that patient from insulin resistance. lets see insulin reaction to macronutrients as follows 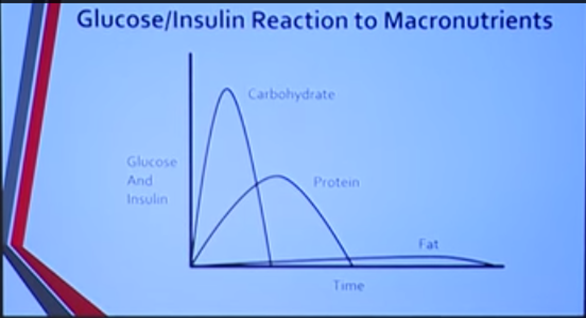 as you can see clearly when we take carbohydrate insulin spikes which is not we want all we want was to reduce the resistance and utilize the insulin.  Based on the above both insulin and carbohydrate are toxic to the body but dietician will prescribe 1500 calorie diet to Type 2 diabetic patient what a strange.

Red blood cell was the most common type of blood cell , its principal work was to delivering oxygen to body tissues via blood flow through the circulatory system, its structure as shown below 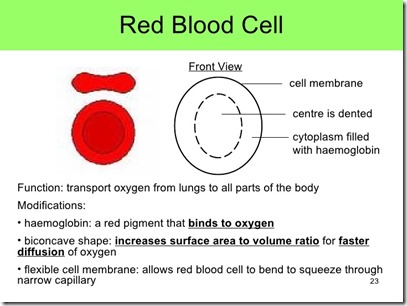 Life time : 100 to 120 days after that new cells will be developed from bone marrow

Glycated Hemoglobin:  Due to non-enzymatic glycation pathway  by hemoglobin’s  exposure to plasma glucose . As average amount of plasma glucose increases  the fraction of glycated hemoglobin also increases in predictable way so to measure average glucose level over 3 months this will be useful to find out the control of blood glucose level in type 2 diabetic patients. 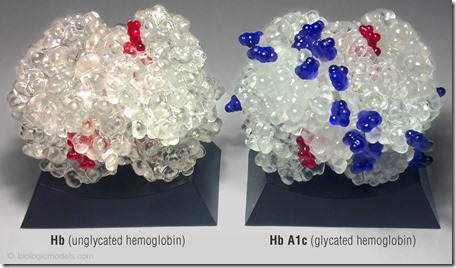 Is HbA1C is good candidate to diagnose T2DM ?

since HbA1c measurement was crucial one so its good to be familiar with factors affecting the test  in general and limitations.

HbA1c was the gold rule to find out the control mechanism of diabetes in that no one has doubt but when it comes to diagnose new diabetic patients that test might interfere with other conditions which will falsify the test result so if there was skewed / elevated result of HbA1c its worth to measure PPBS to confirm or diagnose Type 2 diabetes.